The Making of a Musical 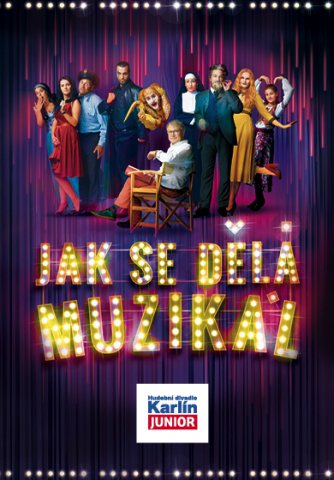 The Making of a Musical – a unique musical revue!

The Karlin Musical Theatre proudly presents its third musical act of the 2018/19 season, the unique, funny and just a little educational musical show Jak se dělá muzikál (Making of  a Musical) by the very prolific and ingenious author and musical director Antonín Procházka.

It´s easy to fly when you are a bird... It´s easy to make a Musical when you are gifted and skilled to face the uneasy... Making a Musical is not difficult at all. You only have to manage to sing when you have laryngitis, act with high fever, tap with twisted ankle, keep smiling even when your favorite cat has just been run over by a car, spend two hours in a heavy medieval armor or just be standing in draught wearing just your own talent. This could sometimes be a very light dress for someone...

All stage elements look very simple, seamless, joyful and spontaneous. That´s the way it should be! Our show Jak se dělá muzikál (Making of  a Musical) is intended for those who are interested in what's behind the lightness, joy, seamlessness and spontaneity.

We can't call it a Performance. It's not even an Educational Concert which sounds horribly like a big boredom. It's a Comedy. A Journey through the beautiful Torment starting with selection of the Title, Auditions and Callbacks, Readings, Staging... We will show you the backstage of the Theatre', its Make-up rooms, Workshops, Prop rooms. You will encounter the Opening night Stage Fright and the Euphoria afterwards.

At the end of your Journey, you might be just a pinch cleverer and smarter BUT without being harmed. Your guides through the Musical birth will be the Masters of their Art themselves:

So have a pleasant journey and see you soon at The Karlin Musical Theatre.

Only in Czech language! Without english subtitles