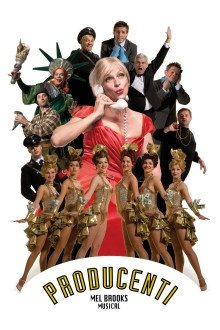 "The Producers lifted me from my chair. That's how modern theatre of the 21st century should be done!“ — the respected television director Jiří Adamec in the article "What Amazed Jiří Adamec" in Glance magazine.

In 2002, The Producers received an astounding 12 Tony Awards (out of 14 possible awards) — the most in the history of this prestigious theatre award. It won in the following categories: music, libretto, director, choreography, music arrangement, staging, costumes, lighting, main actor, main actress, supporting actor and of course best musical. The music, text and libretto were written by Mel Brooks, based on his now legendary film from 1968, which received an Oscar for best screenplay. There are many records connected with The Producers, one of which also belongs to Karlín Musical Theatre: When at the beginning of 2003 the leadership of the theatre got the rights to this musical, it was the first licence granted outside of North America (up until that time the musical was only performed on Broadway and in Canada).

The Producers is set in 1959 in New York. Max Bialystock, an unsuccessful theatre producer, and his accountant, Leo Bloom, get an idea: they could earn much more money by releasing an absolute flop than by the production of a successful musical. The secret is, they take much more money from investors than they need and when the riot around the flop calms down, they'll keep the difference. The financial offices are not interested in unsuccessful projects. "You will get one million dollars from the investors, you will release this flop for one hundred thousand, and the rest you will keep,“ Leo Bloom suggests. "It is necessary to find the worst play, and the worst director. Both will work; a musical about Hitler is sure to be a flop! The audience and the critics will despise it!“ As Mel Brooks said "We got about 30 million dollars, and it cost us ten. If it had been a flop, we'd have had 20 million left, and we could have gone to Rio (like the heroes of the musical). We wanted it to be a flop.“ No one got to Rio, because the musical became a sensation right after its premiere in Autumn 2001 and was hopelessly sold out for the following months.

At the world premiere in New York, starring Nathan Lane and Matthew Broderick, Mel Brooks (set designer, director, actor, producer and composer) said, "I grew up on big shows and that's exactly what I'm offering you now: a good old musical comedy.“ Mel Brooks called The Producers his own "love letter to Broadway.“