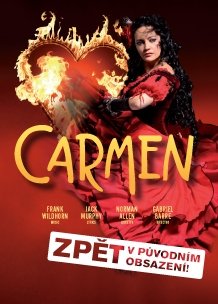 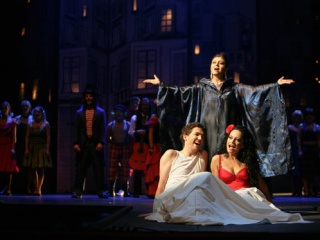 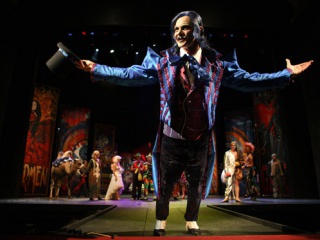 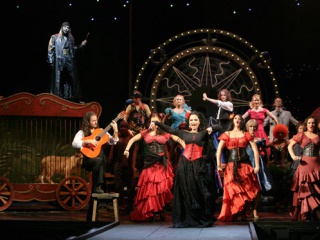 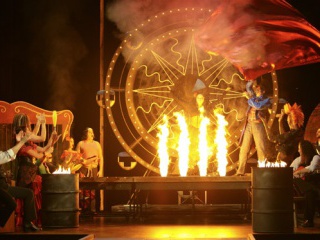 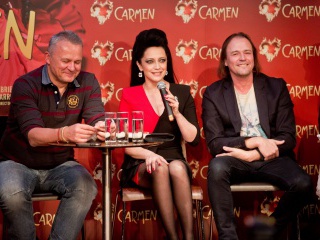 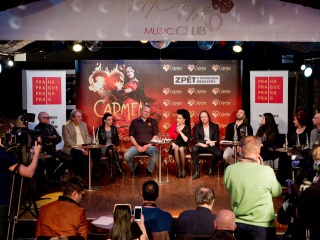 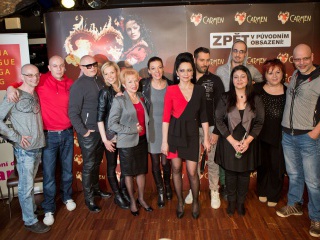 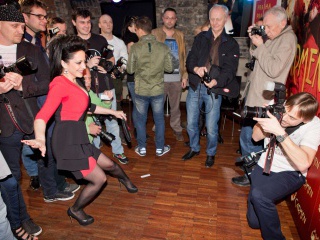 Official webside of the musical: www.carmen-musical.cz

Carmen brings a magical spectacle in the Broadway style to Prague, featuring no lack of daring circus numbers. The cast of stars and beautiful music by Frank Wildhorn promise an amazing theatrical experience such as Prague has never seen before. For the first time in history, a Broadway musical celebrates its world premiere in Prague.

This new version of Carmen, created by a trio of experienced American authors, is not merely a copy of the original book or opera. It isn't a "modern version," but a story "inspired" by the original.

Under the auspices of the mayor of Prague, Pavel Bem, for the first time, we pooled together the strong creative abilities of the managers of both Karlin Musical Theatre and Ta Fantastika in preparation for the world premiere of Carmen.

The conception of director Gabriel Barre unambiguously moved towards a typical Broadway show, based on a very spectacular and elaborate choreography (Pavel Strouhal) and bombastic scenic effects...

A very special and strong aspect of the Prague version of Carmen is a focused performance by the big Karlín orchestra that Ota Balage (Kryštof Marek alternating) brought to almost absolute exemplary execution.

Carmen ... offers so much — first off a family show; a massive set where there is always something to look at (Andrea Bartha); beautiful, multicoloured costumes (the same designer); grandiose acrobatic elements; excellent choreography; and memorable music by a well-established composer.

Every scene fits where it should and is not redundant. In short, perhaps the best thought out storyline in recent memory...

Songs ... creep dangerously into your mind and you cannot get rid of them easily.

Moreover, the first as well as the second half has its own clearly defined finale (in the first half the finale is a choral one). One may wish to sigh: finally!

It is appropriate to use the traditional saying: “You won’t believe your eyes.”

Lucie Bílá... is a very good Carmen, but at the same time she incorporates a lot of the personality of Lucie Bílá into the role...

The role of José is shared by Robert Jícha a Peter Strenáčik. From a singing perspective, both gentlemen are excellent.

Overall, the following words describe the experience: “We haven’t seen anything like this before”.

It would be a great pity not to see Carmen…

I agreed with Michal Prostějovský during the intermission that the world premiere of Carmen brought a real Broadway musical to Prague...

The Karlín Musical Theatre, in cooperation with Ta Fantastika, has moved the Prague musical scene a big step forward.

The Karlín Musical Theatre has staged a magnificent show. True revue-like images fill the whole stage with circus acrobatics, magicians and fire effects that can be literally experienced in the first rows.

Skilfully arranged grand scenes, with a creatively dominant town crier, are among the most impressive in Prague.

Lucie Bílá sings her songs with unique ease and energy. She plays with every line in every song when singing as well as when speaking. We clearly sense a strange kind of fatal sadness, even though ironically this beast is using words to fight as much as possible.

If you come to see any performance full of grandiose scenes and with the excellent Lucie Bílá, you will not leave disappointed.

Whoever understands musicals correctly as a game of perfect dreaming, will find it in this performance in abundance.