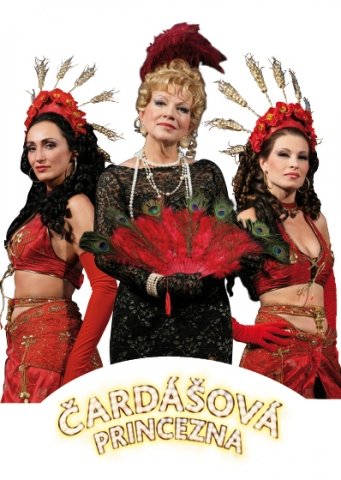 The best and most well-known operetta by Emmerich Kálmán — and one of the most highly regarded operettas ever created — returns to the stage of the Karlin Musical Theatre. This new production, in collaboration with the Budapest Opera House, aims to appeal to a wide spectrum of viewers.

This version has had successful performances not only in Budapest, but also in Salzburg, Munich and St. Petersburg, as well as several other European cities.

The success of this immortal operetta can be attributed not only to its charming music, but also to its humorous libretto.

The young Viennese Emperor Edwin falls in love with the star of Budapest's cabaret Orpheum, Sylva Varescu. But Sylva is leaving for a tour of America, while Edwin is summoned back to the army. In order to block Sylva's departure, Edwin makes an snap decision: He will ask for Sylva's hand in marriage before the notary, who will be in attendance at the Orpheum. At the same moment a formal announcement from his parents arrives of his engagement with his cousin Anastasia. Sylva learns of this and sets out to punish Edwin...

But we'll say no more. Come see for yourself what happens with Edwin and the princess Sylva.

Praise for The Gypsy Princess

"Kálmán's Gypsy Princess delights with the precision of its production."

"It is evident that Karlín is the best musical theatre in Prague and it doesn't need an ensemble of star "singers" to do it — as is so common with productions in the city. The theatre has also proven that operetta lives on and the standing ovation at the end of the show was well deserved by the cast and crew."

The premiere of Kálmán's Gypsy Princess at Karlín is a welcome return to respectable theatre. ... Apparently it's sold out until the end of the year. ... Proof that a well executed operetta packs the house."