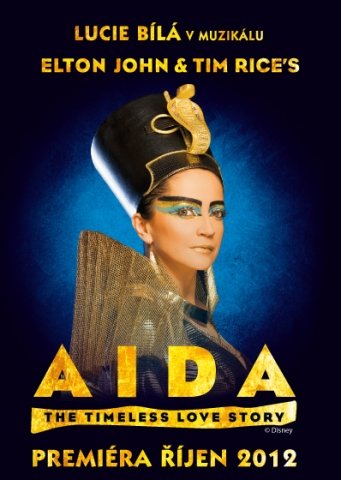 Based on the opera of the same name by Verdi, Aida is considered by many to be Elton John's greatest work. Following successful runs in Atlanta and Chicago, the musical premiered in March 2000 at the Palace Theatre on Broadway, where it had 1,882 performances in almost five years.

Aida has been recognized with a number of prestigious awards:

This thrilling story full of love, passion, emotion and betrayal allowed Elton John to draw on a wide variety of musical genres, including modern reggae, Motown, gospel, African rhythms and, of course, his own typical style, which has garnered him fame and adoration the world over.

Since its premiere, Aida has been performed in 21 countries and translated into 15 languages, including Czech.

Aida is a beautiful theatrical experience for the whole family filled with exquisite performances by some of this country's top performers.